GEN. DOUGLAS MACARTHUR: HIS FOCUS WAS TRAINED ON GETTING THE JOB DONE

Posted on June 12, 2014 by tiardjaindrapradja

In 1943, at the height of World War II, a reporter asked Gen. Douglas MacArthur where his air forces were striking that day.

“Oh, I don’t know. Go ask Gen. Kenney,” MacArthur answered, referring the reporter to one of his subordinate generals.

The shocked reporter responded, “General, do you mean to say you don’t know where the bombs are falling?”

MacArthur smiled and said, “Of course I know where they are falling. The are falling in the right place. Go ask George Kenney where it is.”

Wrote Geoffrey Perret, author of “Old Soldiers Never Die: The Life of Douglas MacArthur”: “The hallmark of the MacArthur style was high seriousness of purpose combined with a studied informality of style.”

It was a combination that allowed MacArthur to spur peak performance in his men when he was Allied commander in chief of the Southwest Pacific Area in World War II and supreme commander for the Allied powers in Japan after the war. 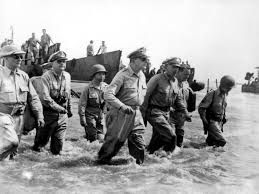 President Dwight D. Eisenhower, the general who served on MacArthur’s staff in Washington and the Philippines, recalled in the memoir “At Ease.” “When he gave an assignment, he never asked  questions; he never cared what kind of hours were kept; his only requirement was that the work be done.”

MacArthur [1880-1964] was a hero of two world wars, winning 15 decorations for battlefield gallantry, including the Medal of Honor. During World War II, he inspired hope in millions around the world.

When ordered to leave the Philippines after the Japanese invaded, his promise to the Filipino people – “I shall return” – stirred them to resist the Japanese occupation. His striking image became a symbol of wartime determination.

After the war, he won the hearts of the nation he defeated. Knowing that good relationships are founded on respect, he made sure he treated the Japanese emperor and people with kindness and regard.

The Japanese people at first turned their backs in a show of abject submission when he passed in a car. To encourage a feeling of equality and cooperation, MacArthur taught them to give a friendly wave of the hand instead.

At the same time, he knew that his own regal bearing commanded their respect. He made sure that he was someone they could look up to, which was very important for the Japanese.

In Korea, his boldness kept the Allies from being driven into the sea. His daring Inchon amphibious landing behind enemy lines turned the tide in the Korean War’s first year, sending the North Koreans into retreat.

MacArthur possessed an unshakable faith in his own anointing. Like many of the post-Civil War generation, he held a romantic view of life in general and war in particular.

“The soldier, above all other men, is required to perform the highest act of religion – sacrifice,” he often told audiences. “In battle and in the face of danger and death, he discloses those divine attributes which his Maker gave him when He created man in His own image.”

MacArthur made his name in World War I. He was already well known in the Army because of his father, the late Lt. Gen Arthur MacArthur. But it was in combat in the Great War than the son earned his own renown.

As chief of staff of the 42nd Infantry Division, MacArthur earned few points with Gen. John J. Pershing, the commander of American Forces in France. The 42nd was a sloppy unit, lax in military courtesy and poor at drill and ceremony. But it fought and fought hard, and that’s all MacArthur care about. “Fighting men are the real soldiers,” he told a subordinate.

MacArthur, who led his men into battle even as a general, was the only man to survive when his reconnaissance patrol was hit by artillery fire one night. “It was God. He led me by the hand, the way He led Joshua,” he said later. To him, that he survived many brushes with death confirmed what he always believed: that God had set him apart to achieve great things.

MacArthur asked no more of his soldiers than he was willing to do himself. In World War II, he repeatedly exposed himself to enemy fire. “The Almighty has given me a job to do, and he will see that I am able to finish it,” he told one officer.

Next to physical courage, MacArthur believed the most essential trait of the successful soldier was the ability to communicate. He picked the young Dwight Eisenhower as his assistant because of Ike’s writing ability.

MacArthur was a writer – some say a poet even – and a talker. He despised meetings but spent hours each day in impromptu talks with others. New officers were routinely brought into his circle through such talks.

His talking could turn down-to-earth men like Eisenhower into enthusiastic fans. He could even win over hard-bitten critics. After an 11-hour meeting with him in Tokyo after World War II, one critic came away exclaiming, “How does he do it? He’s in better health than when I saw him before the war. More fascinating than when he was chief of staff. What a man! What a man!”

MacArthur didn’t just argue people into agreement; he inspired them to believe in him and to imagine the world as he did. He understood what his critics didn’t: than men are moved to the highest purposes and greatest sacrifices by their emotions.

Back home, cynics poked fun at MacArthur’s heroic style of oratory. But he figured out what motivated his listeners, and he focused on that message. Upon his return to the Philippines, for instance, MacArthur told the  Filipino people,

“Rally to me. …… Rise and strike. …… The guidance of divine God points the way. Follow in His name to the Holy Grail of righteous victory!”

“It was an emotional appeal to an emotional people,” wrote Lt. Gen. George Kenney, MacArthur’s air chief, in “the MacArthur I Know.” “I don’t know how it sounded back in the United States, but it was not meant for the people back home. It was meant for the Filipino people, and they really liked it,” Kenney said.

What critics saw as self-promotion, MacArthur saw as leadership. People needed a hero to follow, he believed, and they needed to see someone easily recognizable. So he made his style of dress distinctive – a crumpled Philippine field marshal’s cap, faded khakis, aviator sunglasses, leather  flight jacket and corncob pipe, Few ever forgot the sight.

Although he could be shy, MacArthur was warm with subordinates. He greeted them by shaking hands, often placing his left hand on a man’s shoulder at the same time. He often put his arm around his favorites and flattered people with exaggerated praise to win their loyalty.

A man of action, MacArthur also tried to arm himself with information. His reading revolved around his profession. He read several newspapers every day and often engaged his staff officers in lengthy discussions of the news. He encouraged debate and discussion and was open to having his mind changed, as long as it didn’t involve admitting a mistake.

His warm relationship with Eisenhower soured when MacArthur passed off a mistake of his own as an error by his staff, which then included Eisehower.

Lofty in his view of the world, he was nevertheless down-to-earth in his regard for the business of battle. He had no patience with routine duties like record keeping and often threw away letters and drafts when he was finished with them.

MacArthur started World War II as an air-power skeptic, but he became a convert when he found airmen such Kenney willing to fight. He’d handpicked Kenney to command his air forces after other aviation commanders disappointed him.

The pick surprised even Kenney. When MacArthur was Army chief of staff in the early 1930s, he’d clashed often with Kenney, a brash young proponent of air power.

When Kenney asked why he’d been chosen, MacArthur told him, “In time of peace, you need an officer and a gentleman. In time of war, you need a rebel and a son of a bitch.”

MacArthur saw himself as transcending both, but with the responsibility for picking the rebels and fighters he needed to win the war.

This entry was posted in GREAT MILITARY & POLITICAL LEADERS - IN ENGLISH and tagged GENERAL DOUGLAS MACARTHUR. Bookmark the permalink.